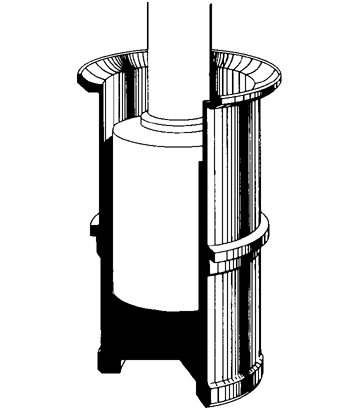 The Hercules Hi-Shear Viscometer system measures the viscosity and other flow properties of dispersions and coatings that are subjected to varying degrees of shear. Each viscometer draws the classic “Hercules Rheogram” and reports data. The “Hercules Rheogram” has been used for over 50 years as a reliable way to predict flow characteristics in pigment slurries and coating colors.

The principal of the Hercules Hi-Shear Viscometer is based on the Searle method of measurement where a cylinder (bob) suspended in a liquid sample starts from rest and begins spinning to a preset rotational speed (shear rate). The spinning effect of the bob is resisted (shear stress) by the liquid surrounding it. This viscous drag causes the adjoining cup to rotate against a known resistance thus producing a torque value. The viscosity of the liquid is calculated from the torque measurement at the maximum shear rate. In addition to reporting viscosity, this instrument produces a rheogram whose shape has been used to predict flow performance of a material as it reacts to changes in shear rate. The shape of this curve indicates if a material is shear thinning or shear thickening as the shear rate changes over time. This feature separates the Hercules Hi-Shear Viscometer from other instruments that only provide single-point measurements under low shear. It produces a continuous flow of results reflecting sample reaction to increasing and decreasing shear conditions over time.

Uses for the Hercules Viscometer

Kaltec’s Hercules Hi-Shear Viscometers simulate process conditions for solving production and product development problems, they have been used to test materials including, but not limited to the following:

The Hercules Model DV-10 is equally suited to generate precise, reproducible results demanded by R&D standards and is durable to withstand the harsh treatment of a process control laboratory.

The software program, WinShear32, allows an operator the ability to determine those variables that can assist in the development of coatings which include: apparent viscosity, shear stress, leveling index, Reynolds number, mechanical energy and kinematic viscosity. One of the most outstanding features of the software is the ability to convert the standard “rpm versus torque” graph that shows the degree of thixotropy of a sample into one of another 45 relationships. It also allows the operator to modify the test period from 5 seconds to more than 15 minutes. Two common comparisons are “shear rate vs. viscosity” and “viscosity vs. time.” Another handy feature is the overlay comparison allowing multiple sample results to be compared on the same graph.

Although the computational capabilities of the model DV-10 have been expanded over previous models, its feature of removing operator influence from test results makes it an ideal instrument to use when a high degree of reproducibility is required. The software can be programmed to establish the testing format of frequent evaluations. This reduces the number of procedural steps and allows an operator to perform many tests within a shorter time period. In combination with its rugged features, precision, reproducibility, and quick-cup interchange, the model DV-10 fits well in an industrial environment. 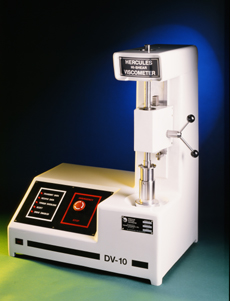 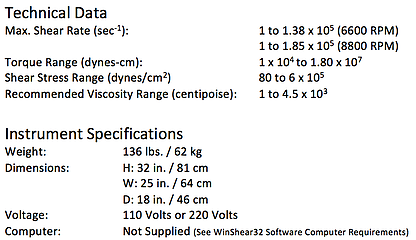 The officially recognized test procedure of evaluating the viscosity of slurry pigments in North America as outlined by TAPPI (Technical Association of the Pulp and Paper Industry) is test method T-648. Hercules Hi-Shear Viscometer procedures strictly adhere to the TAPPI standard in evaluating pigments and coatings. The test is also recognized and practiced in many other regions of the world.

Measurement of Fluid Rheology and Interpretation of Rheograms by Dr. Nick Triantafillopoulos